By ALCHEMIST - April 28, 2013
The Linux OS failed to become as popular as Windows OS but nevertheless it is also a fact that it is one of the best operating systems in the world. More than 85% of world’s supercomputers use some version of Linux as their operating system. Linux stands as the prime choice for embedded systems today; where as windows lacks visibly in that arena.

If you are new to the concept of virtualization then bear in mind that it effectively turns a single machine into several while retaining a symbiotic relationship between the host and ‘guests’. The purpose of ‘consolidation’ is well achieved by running virtualization software on a PC. For ‘security’ or ‘testing’ purposes; virtualization is ideal and can be implemented by installing software.

In market there are several options available for Linux OS. However in our humble opinion the best virtualization software as far as Linux OS is in question undoubtedly is VMware player that can ideally be used both for desktops and servers virtualization. 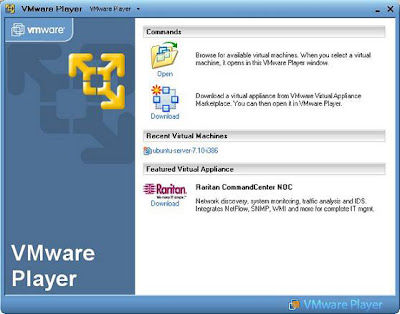 There are multitude reasons for choosing VMware player as ideal virtualization software for Linux operating systems. The prime reason being its cost factor; it is absolutely free for personal usage and even for commercial enterprises such as small or medium business setups the cost is negligible.

The VMware player employs the most advanced virtualization feature available at present and it can easily create virtual machines with up to 4 processors. If you are thinking about dumping your old PC we will recommend you to install VMware player and effectively ‘salvage’ your old desktop.

The VMware player has a much better graphical presentation than any other virtualization software at present. The four crucial dimensions that are addressed by VMware player is creation of virtual machines, execution of high level performance of virtual machines, sharing between two users and evaluation of different applications available in the market on your own pc.

The VMware player does not require extensive HDD space on the host machine and can be employed on any system with a processor of 1GHz or more. The freeware aspect of this product already gives it a much entitled edge over other products.

The only drawback perhaps associated with VMware player is its inability to coexist with other VMware products. Other than that it is an excellent product for users all across the world. The detection of already installed hardware on the host is easily done by VMware player and mapping with guest operating systems is an easily achievable feature of this product. If you intend to create virtual machines on a host Linux OS than VMware is the best option available.