By ALCHEMIST April 27, 2013
Mac OS were developed by Apple; though the world on the whole seems to go bananas for Windows OS but the fact remains that despite Mac being a little behind in terms of market share or growth it is as good as any version of Windows. The dilemma can become a pain if you wish to use Mac and your wife likes Windows so what to do? Well less worries now as virtualization has taken the world by storm.

Virtualization software enables us to turn one machine into multiple ones with no particular hassle. So if you are having ‘quarrels’ over which OS to run on an machine whose primary or ‘host’ OS is Mac then drop the swords and get a decent virtualization software. Your options are not limited; in fact if you start up your ‘search engines’ you may end up with numerous cool ones to install strike two targets with one arrow. Fortunately for you we are in the business to recommend the best only so let us give our ‘cure’ for this problem.

We recommend you to opt for VMware Fusion; though you must buy it unless you can download it in some ‘unethical’ manner which we will never advise you to do. The price of this software is around 50 USD if you want the licensed version that can support up to 3 Macs; certainly a nice deal. The VMware fusion is cheaper than its close competitor Parallels. But it definitely has other competitive advantages over parallels too. 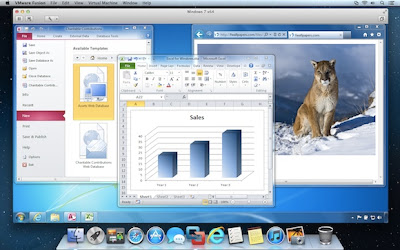 Well, VMware fusion is ideal because it allows you to run Windows and Mac OS simultaneously with data sharing ability. There are no issues here and the graphic interface is good. All features of Windows that you are in love can be run with the help of this virtualization software on Mac OS without any hindrance whatsoever;  available in the market. The devices that are built to support only Windows OS can be run with considerable ease on your Mac thanks to VMware fusion. Not only our recommended virtualization software has this but the unity view option of VMware fusion enables you to run Windows without actually seeing it. So you may get a unique experience like of a hybrid version being run with the best features that you crave.

These are not the only elements VMware fusion is able to provide; it also gives an 18th month email support along with in product tutorials. The only drawback that we found is that the number of USB devices support is less than what parallel has to offer but hey, nothing in this world is perfect! If you still think that our advised virtualization software is not ‘peachy’ enough for you then you might consider Apple Boot camp. It is often publicized as free but there is a catch here; it is free if you have procured leopard OS for the boot camp is included with it. Other than that the only benefit associated with it is that it runs at the same speed as your underlying hardware. Don’t they say you have to take a dive in the pool to know its depth? So plunge in and see for yourself but we will stay with VMware Fusion for now!