Atlas Raider, as its title suggests, is a treasure-themed Facebook game which has gained quite a fan following. This genre of gaming has relatively few entries on Facebook and slowly more games are being released by the companies.

In the very beginning you have to choose your stock character, either a boy or a girl. There is no introduction story and you’re left on a tropical island straightaway. This is where your treasure hunt begins. For your help there is a guide named Newt. Atlas Raider blends board game with the treasure hunting. So your character gets to move around different sections of the game board by rolling a die.

Now what happens when you move certain spaces based on what number has show on your die upon rolling. You get some missions, some tasks from the residents of the island. Some of them include growing crops for earning currency or battling with wild animals like monkeys, alligators etc. Winning battle would give you points but losing one will cost you in terms of energy. 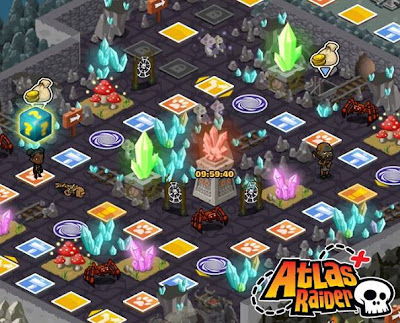 The most significant aspect of the game is that it asks you to cover each space of the game board. This is certainly beneficial for the player as you get to collect bonus each time. The game gives you different items and currency at regular intervals.

When you unlock more treasure chests as you progress further, you are also rewarded with jewels that can be used to generate money and other resources useful in the game. One another good thing about the game is that it has got a very nice freemium system and so your gaming time is extended.

In many of the games on Facebook the energy levels begin to go down quickly and just when you have begun to enjoy the game, your energy is exhausted and the game stops. For going further you need to wait for sometime or buy energy. This is of course frustrating.

Now let’s talk about the cons of the game. There is no back story in Atlas Raider which makes it a bit dull to begin with. A nice little story adds meaning to your spending time on the game. Second major issue is with the unimpressive graphics.

In these times, when even the mobile gaming is seeing so much improvement and innovation in the visuals department, the bland graphics in Atlas Raider come across as a disappointment.

The colors are dull and the character design is strictly ok.  Another issue is with the cursor movement in the game when you go for picking up the collectibles. There is a delay of around a second in it. Since one has to collect a lot of collectibles throughout the game, this delay becomes annoying. The developers need to tackle this issue. Lastly incorporating your Facebook friends in the game is bit confusing and complicated.

In spite of these shortcomings, Atlas Raider is one of the better treasure hunting games around and the blending of board game in it has actually made the gaming pretty much easier to understand for the newbies. This game is worth giving a try.