By Ankit - June 09, 2013
Dungeon Rampage involves a lot of drama and will definitely make you feel that you are the supreme hero of the whole story. So let us go through the review and see what this game holds for all of us.

Forget subtly, it is the perfect time to get armed with a lot of deadly weapons which have got multiple functions and get ready to battle it out with giant fiends and save a princess or maybe two, if you are lucky enough and share your victory with all you friends.

The story of Dungeon Rampage is a bit dramatic, as I mentioned above. The story involves a girl who is seeking revenge against an evil wizard and all of his monster slaves who work for the evil wizard. The enemy have done a lot of bad stuff against her stuffed animal, so she is all set to take the revenge. I know the storyline is bit funny, but that's just the billboard of a game that involves getting rid of the evil and his slaves to free the world of many monsters while teaming up with your friends and finally reaching to the... dungeon? That's the bit of subtlety in the game but believe me that where it stops! 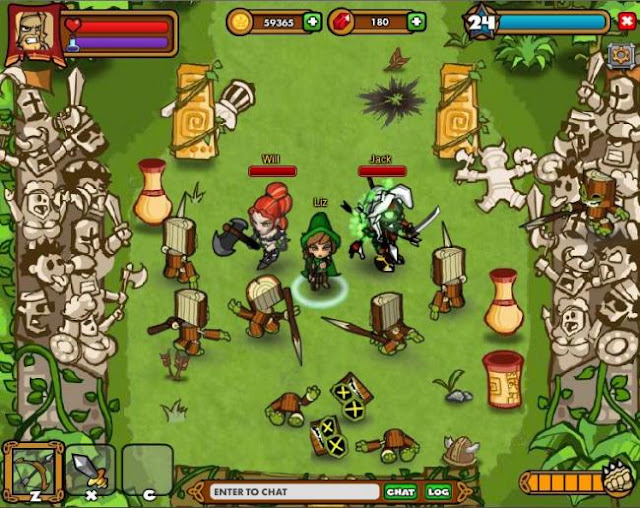 Dungeon Rampage game has got cartoony graphics and in addition to it, this game has a lighthearted touch to the carnage. That is not all, you will get variety of different environments as well as locales of dungeons to go to. You can also go for a low detail setting which is available in the settings area, so that you are able to increase performance if necessary. I felt that the sound effects are too loud for the player and sometime it is annoying as well. Even though it is annoying sometimes, but still it's fun to hear the animated people to cheer for you as you keep playing, as I mentioned above that you will definitely feel like a hero for sure at the end.

If you are looking for a game with a deep gameplay story then you are at the wrong place my friend! This game is for you if you are only interested in enjoying the blind hacking to death of any monster that comes in your way with your friends.
action game facebook games role playing game