Kingsbridge is an addictive strategy game which is seeing an upsurge in its popularity. The premise of the game is very simple. The player is a noble man belonging to medieval period whose job is to rebuild a forest town and also work diligently for its prosperity. The introduction to the story is short and crisp. Afterwards you are given a small tutorial on how to play the game.

You will be given quests throughout the game and your objective is to fulfill them. Completing these quests will not only make your town prosper, but will also help you to save it from the enemies and seize new territories as well. Fulfilling quests will earn you new lands where you can plant new saplings, build homes and create defense structures.

The early quests generally involve building new homes for the town people and providing them with the food. You also need to take care of some other general kind of work which is necessary for the smooth functioning of the town. However, your biggest responsibility as the caretaker of the town is to protect it from the onslaught of the attackers. Naturally you need to take all sorts of measures to safeguard the city, which involves building archer towers. 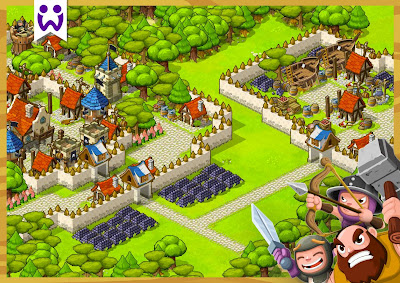 The game wants you to be not only defensive, but aggressive as well. So you too need to attack the neighboring territories and annex them in order to expand your lands. So in different stages of the game you will be visiting different enemy villages to destroy them. In the initial phase you are provided with a small army of footmen. However, as the game progresses and you win more battles, it allows you to unlock more powerful warriors. So you can have ferocious fighters like the Hammerman, the Crossbowman, and the knight.

Like most of the free games available on Facebook, you have to bear with wait times in case of Kingsbridge as well. However, when compared to other games, this game doesn’t make you wait for long time periods. The most wonderful aspect of the game is that it doesn’t make you wait for the basic resources needed by you in fulfilling your quest viz. food, wood, gold etc. Also, the game doesn’t charge you hefty amounts for unlocking new levels. This, in addition to small wait time makes this game one of the best free strategy games available.

It is not just the gameplay alone which makes Kingsbridge a wonderful game. The first thing that catches your attention when you see the game for the first time is its lovely graphics. The game has a cartoonish touch to it and so all the characters look very adorable. The small houses, green forests and archer towers – all of them have been very beautifully crafted. The colors are sharp, and yet don’t put off you much.

What works in favor of Kingsbridge is that it very deftly balances strategy gaming with right mix of action. The brilliant animation of the game is also a big positive in the game. Add to it the minimal waiting time and no demand for payments for higher stages of game, and you have a wonderful game to give you a decent timepass on Facebook.