By ALCHEMIST June 17, 2013
For all the gaming aficionados Facebook is continuously adding new games in order to keep them hooked. Mutants: Genetic Gladiators is an upcoming game on Facebook which has already raised the curiosity level of the people and the reason being its wonderful premise which sees characters like robots, zombies, and vampires coming together in one game.

Clearly the game developers wanted to tap the fans of all these characters. The game is being developed by Kobojo whose chief executive officer is Mario Rizzo, who had previously headed Free-to-Play at Ubisoft’s Worldwide Studios. This new game is the first product under their new business strategy.

The very first thing that players need to know is that why is there the word mutant in the game when it features creatures like zombies and vampires. That is because the game provides each player with a set of different species and then the player can combine different parts of these species and create their own mutant warrior. So you can create a warrior that has the strength of a robot and agility of a zombie. That means that the powers wielded by your mutant shall depend upon the species you have used for creating it. Clearly you need to make your mutant very cleverly in order to make it a potent force. 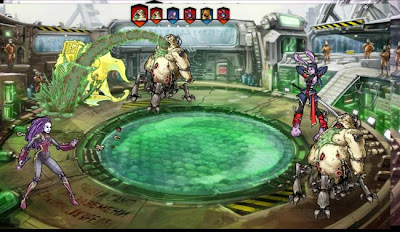 The next step, after creation of the mutant warriors, is to take them around the world into different fighting arenas.  If you remember films like Bloodsport and Mortal Combat, you will be well aware of what these fighting arenas mean. The purpose of visiting these places round the world is very clear – your mutant warriors will be battling with the other such mutants. The idea is to win as many battles as the winner gets new species and that means the ability to create more powerful mutant warrior.

Mutants: Genetic Gladiators is intended to be multiplatform and free-to-play. The developers are not leaving any stone unturned in making this game attractive for all sets of players. They want the game to have a broad appeal. So, on one hand the new game will be fairly easy to play for the entry level players i.e. those who are not into online gaming much. But at the same time the adept players will have a no. of challenges in the game that will keep them hooked and their adrenalin pumping.

How to play Mutants: Genetic Gladiators

So far the game has been kept under a lot of secrecy and only few screen shots have been released. These screenshots give some idea about the graphics and the creatures being used in the game. Mutants: Genetic Gladiators is being beta tested and the public release of the game is expected around July on Facebook.

The company has more ambitious plan for the game and so they will be releasing the mobile version of the game too few months down the line. The mobile version will be multiplatform as well and could be played on iOS, android as well as windows.