By ALCHEMIST - June 25, 2013
World of Western is a social strategy game on Facebook. As its title suggests, the game is basically cowboy oriented and so the basic theme is that of combat gaming. It is better to have some idea about these kinds of games before you begin to play them.

World of western: gameplay and features

The player starts the gameplay by first clearing his town of things like Joshua trees and rocks. Then you can have a look at the other important aspects of the game. So you have the sheriff’s office which has been given the form of army barracks and encampments. Then there are farms which are called plantations in the game.

There are beautiful cowboy homes made of wood and of course there are saloons, one very basic entity needed in any cowboy setting. But you can’t rotate them and that is one problem because it makes it very difficult for a player to recreate the streets in the manner that the shops face each other, just like what is often shown in the Western films whenever there is a duel between two parties. 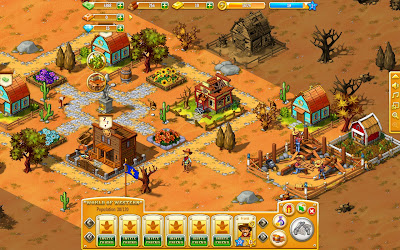 However, it is the combat part of the game which actually makes this game worth trying. So you can either go for battle with your Facebook friends in player v/s player duel, or you can follow the eight-boss campaign.

It is better if you first watch few battles as it gives you better idea about the whole gaming. There are different combat units like cowboys units, hunters, mounted riders, Native Americans among many others. This adds a lot of variety in the game. You can aim and shoot at the enemies by clicking your mouse over them.

Now here comes a very interesting thing about how units work. Each unit works according to a rock-paper-scissors combat system. What you need to do is running your mouse over the enemies and the allies. The tooltips then pop up which explain to you how this particular combat system works.

The gaming altogether moves to the next level when World of western introduces combat units that look straight out of some Hollywood film. They include armored railcars with massive cannons which can very easily blow away the cowboy defenses.

So if we talk about the pros of the games, the very first thing that comes to our mind is the way old west has been presented in the game.

Whether it is the characters, the buildings, saloons or the enemy units – everything looks beautiful. The visuals are good enough for the kind of game this is. The design of the characters is nice as well.

The combat part of the game is the best thing about the game. However, the game lacks novelty and uniqueness. The gaming sounds too much familiar and throughout the game you have that feeling of been there and done that.

The game is good for those who are relatively new to the world of social strategy gaming. For those who have been around for long time and looking for some innovation, World of Western has very little to offer to you.
facebook games strategy games