By Ankit - July 28, 2013
Pros: Solid gameplay based on Clash of Clans, nice characterization
Cons: No originality, wait periods are too long.

The game puts you in charge of an entire army who is responsible for protecting the village along with its princess from a skull masked shogun army and from attacks of random players who come into your village and loot all your valuable resources. That is, the aim of the game is to built a strong army which can not only defend the village but can also raid the villages of other players successfully. 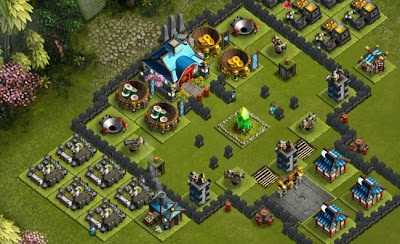 Without constant hardwork from your side your village can soon turn into a barren land. To protect your village and help in grow you need 2 things- gold and sushi which is developed by your village itself overtime. Gold is to be used to get resources for your army and to build stronger defense whereas sushi is required to train your forces. The more sushi you spend the more stronger your soldiers will be.
Considering that the storyline is set in east, you can guess that the characters of the game are ninjas. While your whole army is primarily ninjas only, the ninjas themselves have multiple divisions within them. Starting from the powerful ninjas like Stealth Ninjas who are sneak behind enemies lines and attack from behind, you have classic grunts as well as kunoichi who serve as cannon fodder and far distance warriors respectively.

Other than Ninjas you have Oni, these are ogre like creatures which roam around in the village like zombies and protect it. These are in fact the basis of strategy gameplay in Dojo Mojo game. While the ninjas will automatically attack any enemy who is nearest to them, the Oni can be commanded to combat specific characters in the game. The Oni's are another thing that differentiates Dojo Mojo from Clash of Clans. 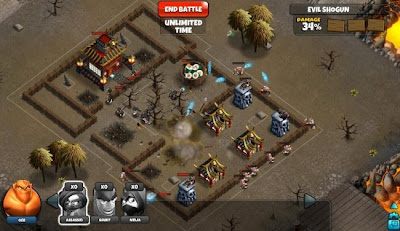 Just like Clash of Titans, Dojo Mojo requires a lot of patience to play. The gold and the sushi take a considerable time to replenish which means that in each instance you launc Dojo Mojo, there is a very limited amount of fun you can have while playing it. Then you have the training of your troops and even the buildings take time in upgrades which all together adds a lot of "waiting" time.

The in game currency, Jade is the thing that can fasten the game but then you have to buy it if you really want to use it a lot. You get a lot of Jade in the start of the game which is actually necessary with the other players just sitting on the fences waiting for your gates to become penetrable. Other ways to get Jade is of course to buy it, by recommending other players to the game or perform extra ordinarily in the battles.

Though there are a few differences in Mojo Dojo compared to Clash of Clans, but more or less it is the same game. If you have not tried out Clash of Clans then Mojo Dojo is definitely a solid game to try, just make sure that you have another game at hand to play while you are waiting for one or the other thing to complete in Mojo Dojo.
strategy games zynga games