By Unknown - August 20, 2013
If you are looking for a social strategy game that doesn't tax your moneybag, Vega Conflict is the right choice for you. Pressing the play button will sweep you to the game of excitement with a world class animated site accompanied with enchanting voiceovers. If you have already set your hand with KIXEYE’s Battle Pirates, Vega Conflict may appear to be easier, but as you proceed with the game, it suddenly takes a different turn when it reaches the space transition level with verve.

Vega Conflict is a resource strategy game where you have to put in your skills to collect the minerals hidden amidst the floating asteroids surrounding you in numbers in the platform. You need to form rescue teams to transport the minerals into the camp with all safety measures. In the process, your team will be encountered with several hidden enemies from the Vega Corporation, and you need to shun them down with the help of the tools of offense offered by the game planners. Though Facebook has already introduced such resource-strategy games, like the titular conflict of KIXEYE, Vega Conflict gives you a different taste and vigour in its methods of resource acquisition.

You can take out the minerals of your choice from the asteroids which is directly dependent on the type of miners you have chosen to deal with them. And here you find Vega Conflict more attractive than its other strategic game competitors. KIXEYE has purposefully strategized the game different this time by removing the pent up tension while you expand and added up with multi-dimensional activities to maintain the thrill till you win.

The most interesting part of Vega is the combat. Though the easiest and safest way to score high in collecting resources, is mining, Vega allows you to be more adventurous as you can hunt and steal more resources from their Ships. Then you have to be ready for the combat in real time which may remind of some earlier space battles that you might have played in Eve Online, but fighting with Vegas is easier as you can win the combat by releasing all your arms at your enemies and all is over within a minute’s time. The only loss you may have to bear is some minor costs for the astronomical repair works for your ships. 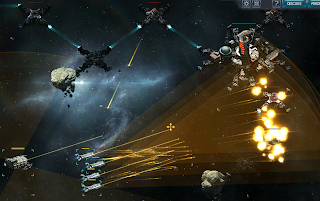 To make you happy, Vega ships have loads of options to be played with. The online version offers an intriguing ship modification system, which introduces ranges of new weaponries and shields and as you keep accumulating more supplies and facilities, you learn to earn better ways of modification.

Be there to have more and more fun as you can just put other players at a fix and enjoy a journey beyond the local system.

Vega conflict is always a win win game for all who are not big spenders. Vega Conflict is free of cost in the first few hours of the game, and you feel its worth once you play.

Vega Conflict does make it a perfect combination of resource-management game with real-time combats with its awesome visuals and storyline. Vega stores in it an overwhelming experience with a joyous ride and memorable fun.
facebook games strategy games