By Unknown - October 04, 2013
Match-three or Hatch-three games were always listed in the list of favourites of players from all ages. Dragon Academy has added a new colour to that genre with its latest engrossing features. It isn't only a game of putting the three or more icons together which has the same colour, but a game that will make this apparently easy task a challenge. You have to develop a basic skill in slaying the Dragons to score high and reach the final level.

The primary character you have to work with is a tiny starter lizard Melty. The game takes you into the world of a comic book which will make you stumble for a while with its scattered pictures. Your task is to get Melty admitted in a Dragon school. Once he is there, he becomes your power gun and he will do the work of conquering all the dragons of the same colour of an entire row, once you charge him by selecting and gathering three or more same coloured icons.

Dragon Academy doesn't differ much from the basic rules of match-three games. So, the lives and levels are the same. But what makes Dragon Academy remarkable is the intricacies of the tasks that has to be done in each level until you reach the last one. With five lives you have plenty of scope to carry on with the game till you are done with the required score that takes you to the next level. The common tasks that will recur in each of the levels are defeating the hurdle named “goo”, creating potions and fill them at the base. Melty will amuse you with his dramatic gestures while he is all set to defeat the Goblins which are called here as Wobblins who are trouble makers to other Dragons.

The game moves ahead with Melty growing bigger and stronger to face more able-bodies Dragons with more powers. There will be a plethora of colours in the dragons with which you need to play as you march forward in this game. 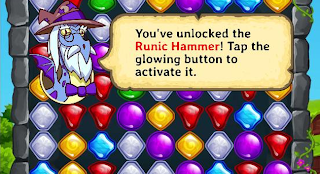 If you think that Dragon Academy has this much in its store and you will not have to pay much to come out as a winner, then you are guessing it all wrong. Seemingly negligible, Dragon Academy draws your attention slowly but steadily into the midway, from where there is no point of return, unless you pay and play. The game plan follows like many other social game strategies to hook you with an easy deal and later make you run and pay to come out satisfied.
The complexity that keeps increasing with the levels will make sure that you use a better sense of judgement while choosing the power-ups for your Melty.

Dragon academy was all quite fun, with its enchanting soundtrack and Melty will surely win your heart with his cheerful gestures and will also cry out if you can’t catch up the next level.
The technical side of this game is the only black side which needs a serious make over. The options of inviting friends and following the visuals are quite disappointing at times.


Overall, Dragon Academy has the ability to make you sit at the edge and play through all its tricks and finally agree to pay for it.
Android game facebook games iOS game puzzle games