Doctor Who: Legacy Review, Storyline, Gameplay and Tips to Play

By Unknown - December 07, 2013
Fiction had always been a source of popular game plans. Doctor Who: Legacy follows the same rule. It is a free-to-play game but has some interesting twists and turns making it stand out of the ordinary stamp. It has enhanced the mere matching-the-icon trend into a tug of war, where the player has to be the Doctor with other helping hands takes all the necessary measures to fend off the enemies be it Cybermen or Weeping Angels.

Storyline
Being the Doctor, the only trick to safeguard yourself from your enemies is to match different sorts of gems. Even your fellow beings have the same option left to save themselves. You and your folks will have certain abilities which can work out in several ways. Some can do some positive work, while some other can create havoc, some may show up techniques to win the battle and some can finalise a pact. The other feature which captivates the players is trying out the combination team which suits best to defend the other one. As and when you keep marching ahead in the game and invite more team members, you have to find out the abilities they could acquire.

If you have not selected the gems within 5 seconds, you will be timed out. The game has in its store few more challenges for you. It can allot a different gem which you didn't choose. Fighting this apparently easy trick can take a hell lot of time and put your scoreboard down.

The different levels of Doctor Who: Legacy will introduce

you to a number of enemies of the Doctor. You may meet up the Tenth Doctor or Rory at any of these levels. Here some of the characters may “drop” some abilities which you can use later to upgrade other characters. This adds up the chance to replay the game collecting different abilities. But it is going to be quite a time consuming matter if you wish to select the faces that you want and their allies from the row.

You can buy time by visiting the cash shop to grab those extra character sets along with their advanced levels. But what is left in a game, if puzzles can be easily solved. So, if it is just not a time killing game for you, it is better to go the rough way and achieve what you want. For more fun and rejoicing the other incarnations of the Doctor like River Song or Amy. 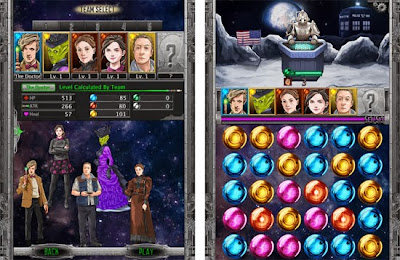 With all its intricacies and complications Doctor Who: Legacy is a game that will always bring about a refreshing gaming experience even though it might not claim the best game award in the match-three puzzle genre. The soundtrack is perfectly tuned with the ecstatic visuals that enrich the game that takes you in the sci-fi world of Doctor Who. Doctor Who: Legacy is a game that is never a wrong choice as it leaves you satisfied whenever you want to have a trip in the world of fantasy and practice your match-making skills.