By Ankit January 04, 2014
Pros and cons
Pros- Silly sense of humour will make you addicted towards this game, impeccable graphics, people from all ages can dwell in this game, RPG sound track, pixel based graphics
Cons- Short and silly game not much to describe about

Do you remember what fun it was to play the very first Dragon Warrior game on the NES or the Monkey Island game which we all miss? Well, if answer to this question is resounding yes, then you might also remember that you used to purchase clothes- armour. The main question that we asked each other was- was the hero naked before we purchased clothes? Of course, he was not really naked or at least we couldn't view it because of limited graphics and stringent censorship policies by the developer. However, the legacy continues with this game. It is an odd adventure game fueled by silly jokes, pantaloons, shorts and underwear. Yes, you read it right, underwear!

This game tells the complex story of Sir Pantsalot, a knight living in a kingdom that’s pestered by a monster known as underwearwolf. There are other monsters too in the society all based on people's undergarments. Sir Pantsalot is a noble gentleman has obvious problems with the indecent exposure by these monsters who don't have much of a covering. He commences his journey of covering the private parts by collecting underwear, but the journey is tedious and difficult.

This silly, funny game is really addictive. Coolest part of this game- it retells the similar jokes again and again, still it manages to bring smile on the face of a player. Further, the juvenile themes of the game is really wonderful and it blends well with pixel based graphics and RPG soundtrack.

The major hiccup of this game is- there is nothing much to do about it. Although it is being called technically as adventurous, fun game, but there is little to speak about it. There is no scorecard, no battles and no weapons or equipment expect for the aforementioned pants. The only thing in the game is the way Pantsalot converses with villagers, takes forward the stories and searches for hearts that add to its overall health. 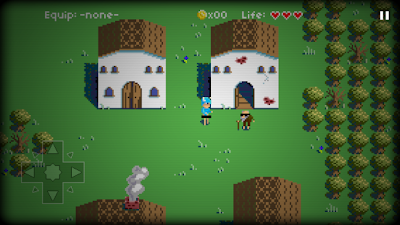 The game entails different episodes, with each episode of about ten to twenty minutes. Presently, there are two scenarios to play along with a Christmas episode. Once you are done with the game, you are free to play with it again; to seek more items and townspeople that you missed in the first time.

It is easy to download free game. The developer pops up in between the game sometimes to ask for donations so that he can develop more games but it is purely on voluntary basis and is executed in an amusing way.

If this game is able to earn huge cash in the present state, there will be more chapters to add in the future. Once you play this game, you’ll might crave for this adventurous game. If the game sounds ridiculous, then also give it a try because you have nothing to lose and after all there no harm in encouraging a new developer!