By Unknown - January 13, 2014
If you have had fun with classic Arukone, you would certainly like this new minimalist puzzler game Lyne where you have to connect two look - alike shapes like triangles or squares which would be scattered around the screen and you need to place them on a particular grid without breaking the line. Each of them would have distinctive boundaries and it won’t be difficult to save them from getting overlapped. If you are wondering coming at this point that what is the puzzle in this, then you need to enter the game and watch out how can it puzzle you to the roots.

The apparently easy game plan will allow you to draw lines diagonally on a graph paper looking background. The endless options that are available in Lyne would make your mind wander and this is surprisingly one of the game strategies that mark Lyne as a unique game in this genre. 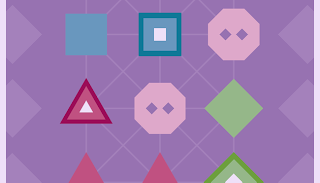 Lyne is a double-edged sword that works two opposite ways at the same time. While it puzzles the player at the same time it navigates them to reach the goal in a faster pace.as and when you get the hang of it and almost done with the understanding of the strategies, it will make you feel suddenly naïve. The multiple coloured spaces that match with the shapes will create an optical illusion and the apparently simple task of matching the shapes without touching their boundaries would seem impossible to be done. This implies that a blue square’s line is not supposed to be intersecting a green diamond’s line, but at the same time you are also not allowed to  block the access leading to the diamond as the green line must reach it.  This often makes it a long drawn process with never-ending loops where a line will keep encircling the screen before it returns to a final shape that would be awaiting you just one block away. At this juncture you are most likely to get access to unexpected solutions for those apparently simplified hurdles.

The most intriguing and complicated puzzle that LYNE will make you fall into is its octagonal hubs that will allow any line to go through them, but it has to be bypassed for only a specific number of attempts.
Though the multiple coloured spaces in the board can be intersected only once, the hubs can be crossed simultaneously to the dots which are marking them. One has to remember that a hub with two dots has to be crossed twice, on the other hand a hub with four dots is supposed to be crossed four times and so on.  These hubs make it really difficult to traverse the grid, as they will be the single location that same, two different or more coloured lines would be able to cross.  When you would be reaching the endpoint, puzzles gets tougher and demands more and more hubs to be filled out.

Lyne with its 25 levels will engross you with its mind-boggling puzzles till you come out triumphant.

Cons:
Lacks variation and may turn off few players who are looking for a combo entertainment.