By Unknown January 26, 2014
Are you ready for taking that Mega Jump, then Get Set go! They are giving you another experience in their latest launch of the sequel to the smashing hit Mega Jump, Mega Jump 2. Beware of its intoxicating effect and get disconnected from the rest of the world to keep up the jumping about spirit that it invokes.

In Mega Jump 2 you would be mainly jumping and falling and in the middle of the game you will be switching between both of these two activities which will be apparently so seamless that it might be very difficult to get along in the first few minutes. In most of the game levels, one has to be on the offensive side, but to steer your way to the winning line you need to look out for the gems and coins which will raise your scoreboard upward encouraging you to gather up the momentum to go strong and steady.

At one point of time immediately after you get the hang of the game you’ll be hitting a patch of sky where you’ll get some scarce items, here the appearance of the  platforms look flimsy which slows down quickly into the action of  a Doodle Jump experience where you need to keep your cool and alertness up and running.

There is another option of power-up where you get into that dream-like action of skyrocketing, sailing through the clouds before you are even prepared for it.

You are going to face three different environments spread over the entire game time, but one doesn't get to realize when the background changes from a jungle to the rocky canyon or a sunny beach. Each of them makes you experience all sorts of fun hazards which displays the precised game mechanism,
Apart from these you can  you’ll get those baddies you may require  to bop the head or those trickster coins which will jump out of there way just when you would be on your toes to nab them. There can even come a ball-and-chain option puts a damper to test your jumping skill. But there’s nothing to be in panic as plenty of awesome power-ups are available to whizz pass these hurdles in a jiffy. Then there is this Mega Mode that makes your monster enlarged enough to fill up the majority part of the screen space and remove each and everything that comes in his way.
Get Set games went for a recurring design over the default level-based ones in Mega Jump 2. 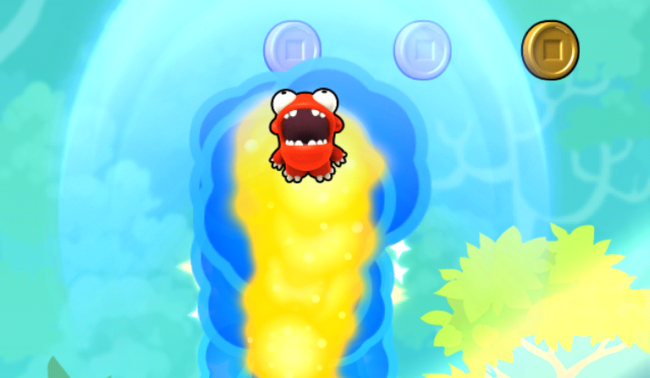 To unlock a colourful crew of monsters apart from the default Redford one, you can buy a majority of them with the coins that you have earned from playing. Some of the coolest characters you can never forget are the Foxworthy the Fox or the Dizzy the Dragon but all of them will make you spend those premium currency gems. But once you are in the winning mode, these will only make you feel worth it.

Mega Jump 2 made everything work that was expected as a sequel to the original Mega Jump and made it a trend setting series.

Pros:
Jumping and falling gameplay turning into an adventurous tour.

Cons:
At times the unlocking of characters becomes too tough to get through.