Soldiers D.U.T.Y Next review, gameplay and tips to play

By Ankit - January 13, 2014
It is taking me quite a time to decide the best way to moderately start the review of this game. Not because it has a lot to talk about, but because it is not even worth the graphics they have put up. Soldiers DUTY looks more like a college project which has been published on Windows store. Play with touch controls or with keyboard or mouse, the game is not worth to even try!

Developers: CyberCowy
Ratings: 0 out of 10 stars 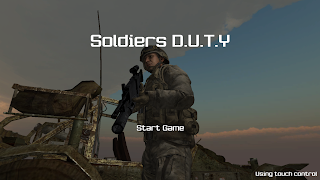 There is your single character standing on bridge after you vehicles got destroyed by the enemies. You are with a gun in complete military uniform. There are jeeps which have been infected some virus and trying to get past the bridge. Your aim is to stop these vehicles from crossing the bridge and defend your position. To stop them you have to hit them with 5 bullets on which their jeep blows up. There is a continuous stream of jeeps trying to come in and for each hit on the bullet you get one point. You have 100 life which will get reduced by 5 every time a car is able to cross you. 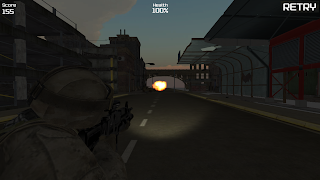 And....... that's it! There is nothing else in the game. No extra levels, no change in the frequency of the jeeps entering in the city or any upgrade to your weapon. You can't even move your character and all you can do is move your gun left, right, up and down and one button to fire. You can play either with touch or keyboard and mouse

Soldiers D.U.T.Y is not a game worth even trying. It would have been better if the developer had rather sold off the game as an academic project.
Windows 8 games